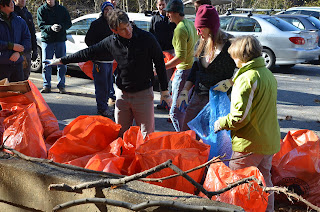 Paul Barringer, a local climber and MAC member who spearheaded planning of the Northwest branch event says that he enjoys the area because it is a little bit of wilderness right in the midst of the suburbs. “As an urban crag, Northwest Branch gets a lot of use–which brings a host of attendant problems like trash, wear and tear on the trail, and graffiti,” he said. Berringer explained that while bouldering at Northwest branch has a low impact on the environment, and access is easy, it is still important for climbers to play a major role in addressing problems in the area. “It’s also great to have the opportunity to make a contribution and meet new people.”

According to MAC President Chris Irwin, both Northwest Branch and Illchester rock, the site of the season’s second adopt-a-crag, could be considered urban parks due to geographic proximity to high population areas, and increasingly high strain on the resources including the climbing areas. “Illchester rock in Patapsco and Northwest Branch are both right off of the highway, close to where people live, and they get a lot of use,” he said. “It is important for us as climbers and as environmental stewards to make sure we have the smallest impact on the natural environment possible,” he said describing several of the projects at the Illchester adopt-a-crag including construction of a retaining wall at the base of the cliff and stairway rehabilitation. 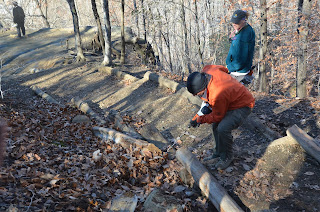 Describing the work completed at Illchester rock by MAC volunteers, Patapsco State Park Ranger and volunteer coordinator Robert Eckhardt said, “This kind of project costs me a lot, and for each of you to come out and do a little bit means a lot. The stairs look great, the retaining wall looks great, you really should be proud.”

Berringer, Irwin and MAC are looking forward to playing a major role in the stewardship of Northwest Branch and Illchester rock in the future and the group has several events planned in the coming months.

Mid Atlantic Climbers is in the process of scheduling follow-up projects at both areas, so that local climbers can continue to show their support for local areas.